By: Faith Alone
In: Apologetics, Catholicism, Salvation, Theology
With: 0 Comments

It is with the utmost love, and respect that I write these blog posts that are in opposition to Roman Catholic teachings. It is my desire for my Roman Catholic friends and family to come to know the truth that their Churches teachings are not in alignment with scripture. I hope to demonstrate today that the Roman Catholic Mass contradicts scripture as it adds to the finished work of Christ the will of man, sacrifices and offerings of Mary, & the dead saints. The RC Mass only offers a partial forgiveness of some sins which is a direct contradiction of Hebrews 10. I pray the Lord opens your eyes to His word so that you may hear His voice on the pages of scripture.

Therefore, when He came into the world, He said: “Sacrifice and offering You did not desire, But a body You have prepared for Me. 6 In burnt offerings and sacrifices for sin You had no pleasure. 7 Then I said, ‘Behold, I have come— In the volume of the book it is written of Me— To do Your will, O God.’ ” 8 Previously saying, “Sacrifice and offering, burnt offerings, and offerings for sin You did not desire, nor had pleasure in them” (which are offered according to the law), 9 then He said, “Behold, I have come to do Your will, [b]O God.” He takes away the first that He may establish the second.

”10 By that will we have been [c]sanctified through the offering of the body of Jesus Christ once for all. 11 And every priest stands ministering daily and offering repeatedly the same sacrifices, which can never take away sins. 12 But this Man, after He had offered one sacrifice for sins forever, sat down at the right hand of God, 13 from that time waiting till His enemies are made His footstool. 14 For by one offering He has perfected forever those who are being [d]sanctified.

Christ’s one sacrifice is sufficient to cover all believers sins, future, past and present. Forever. Now He waits. For this reason there is no need for Him to stand back up continually, come down to earth thousands of times daily to enter into earthly elements that only temporarily forgive, some of our sins.

12 He had offered one sacrifice for sins forever, sat down at the right hand of God,

14 For by one offering He has perfected forever those who are being [d]sanctified.

If Christ was coming down to enter into elements of bread and wine and that person either takes it in an unworthy manner, or; as it is taught by the RC Church, can lose/forfeit their justification by the act of sinning or walking away, then this would be a sacrifice that doesn’t perfect forever. A sacrifice that falls short. A sacrifice that requires the will of man and his/her participation to have any effect at all, and if true, only a limited effect.

According to RC teaching a person after receiving communion can walk out of the Church forgiven of their Mortal sins (but not all sins). The person can then commit a mortal sin and lose their salvation requiring this process to be repeated over and over again throughout his/her life with no real assurance of salvation. Even after all this the person still must be cleansed of venial sins in purgatory so Christ sacrifice doesn’t really perfect anyone.

Verse 14 – For by one offering He has perfected forever those who are being [d]sanctified.

Please take note that Christ has perfected (past tense) forever.

There was a time in our history where making the above statement would have put my life in danger. But the Roman Catholic Mass and works based righteousness in any form (even in protestant denominations) simply cannot be true because it directly contradicts God’s Word.

Every week you attend Mass when you say the words “Pray brethren that my sacrifice and yours may be acceptable to God” ask yourself  this question. What sacrifice can you offer that God will accept for salvation outside of the one sacrifice that He’s already given for all those who believe in His name? If God didn’t accept the daily offerings in the old testament to take away sins, why would we think He requires additional sacrifices and offerings on top of His one perfect offering?

Christ’s One perfect sacrifice is sufficient to save completely all those who repent and believe in Him. This is not a process that needs to be repeated, nor is it a sacrifice that ever falls short only covering some but not all sins.

It is Christ and Christ alone who saves according to His good will and good pleasure (Eph 1:9). Our repentance is granted to us (2 Tim 2:24-26), our works, thanksgiving, & obedience are all a result of the power of a Holy God who puts His Spirit within us, gives us a new heart and moves us to keep His laws a ordinances (Ezekiel 36:27).

Once we realize that no matter how clean our life is, how hard we try to keep His law, no matter how many good works we do, there is absolutely nothing we can bring to the table to offer God for eternal life. Our only hope is in Jesus Christ. This, my friends, is grace. 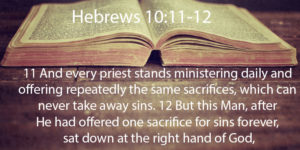